The strikes (or “les grèves“) are one of the biggest clichés about living in France.  And much like the difficulties of dealing with l’administration or the frequency with which French people say “oh la la“, after you live here for a while you quickly realize that this cliché is very much true.

I’ve seen many a grève during my time in Paris.  For example, when I first arrived in France in 2010 there were widespread strikes about the government’s decision to raise the retirement age from 65 to 67.

It was all quite a novelty for me at that stage.  I remember the first time I saw a manif (as a grève is often coupled with a demonstration a.k.a. “manifestation“, or “manif” for short) making its way through the Place de La République I thought it was some kind of street party and stopped to take photos.  In my defence, it was a fair mistake given the grèvistes’ penchant for large, colourful hot-air balloon type things attached to cars, flags, marching bands and roving drummers.

In fact, the get-up for manifs is taken so seriously in France that you can even go to the website of the main unions (such as the CGT, the Confédération générale du travail) and buy your own “matériel manif” (protesting merchandise), ranging from novelty glasses to smoke bombs (with buy-in-bulk discount (“tarifs dégressifs !!”)).

Needless to say, after a few years living near the Place de la République and witnessing many a manif, nuit debout and general rabble-rousing on a regular basis (once we even had to close the windows of our apartment because tear gas was getting in), we grew a little tired of seeing the CRS armoured trucks rolling down Boulevard Magenta (the CRS or Compagnies Républicaines de Sécurité are in charge of crowd and riot control in Paris – whenever you see their trucks lined up and down the street you know there’s a manif, parade or some kind of public spectacle brewing).

Once the smoke has settled, it’s always funny to hear the notoriously large discrepancy between the estimated number of demonstrators according to the unions versus the number estimated by the police (“Selon les organisateurs ils étaient 100,000. Selon la police ils étaient 30,000” / “According to the organizers they were 100,000.  According to the police they were 30,000”).  This is such a recurring scenario that one entrepreneurial consulting firm has even set up a business to count the number of demonstrators using a system of radars installed along the planned route of the manifestation.  But of course, as soon as they started publicizing their results people started protesting against them.

Like most French people (et oui, I am officially French now), over the past few years I’ve lived with the grèves without much fuss.  Of course, they inevitably tend to be scheduled for the day you’re supposed to take a train somewhere, fly with Air France, or go to see La Traviata at the Opéra de Paris (yes, it happened to me a few years ago – the show was cancelled because the set and costume designers went on strike).  And it usually takes a while to establish who exactly is on strike and how it may affect you (“If it’s just the pilots we should be fine, right?”  “Ah non, it’s the air traffic controllers, that changes things…”).  But for the most part there’s not much you can do about it, so you just learn to vivre avec. 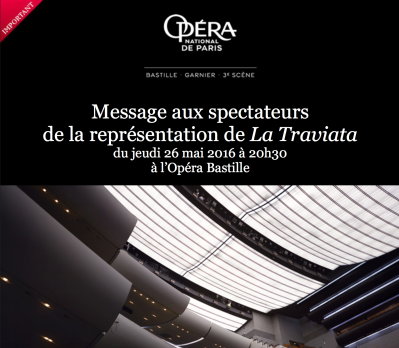 Yes, the set and costume designers are a surprisingly powerful bunch

Recently, however, things have gotten out of hand.  In April, just before the Easter break, the unions of France’s national state-owned railway company, the SNCF (“Société nationale des chemins de fer français“) announced a three-month, rolling mega-grève.  The strike is in response to the government’s proposals to reform the railway sector, including phasing out the “cheminot” status enjoyed by many of the SNCF’s workers.  As a result, the cheminots decided to strike for two out of every five days over three months (a period that *could* be extended), which looks a little like this:

Pin this up in your office, stat

When the strikes were announced, I knew we were in for trouble.  First, the strike days often coincided with the famous ponts of May.  The ponts (or “bridges”), for those not in the know, are a wonderful French invention, up there with the Minitel and the Café Gourmand.  Basically, if a public holiday (“jour férié“) falls on a Tuesday or a Thursday, then the pont potential opens up to take the Monday or the Friday off to “bridge” the gap between the jour férié and le week-end.

This year was a great year for salariés (employees), pont-wise: Labour Day (la Fête du travail , 1 May) and Victory Day (Victoire 1945, 8 May) both fell on Tuesdays and Ascension (10 May) fell the Thursday after Victory day, creating the potential for a “mega pont” (or viaduct, as some of my French colleagues liked to call it).  I realized it had all become a bit ridiculous when I overheard an exchange between two colleagues at the office on a Monday (at lunchtime) that ended with a mutual “allez, bon week-end“.

Bref, seeing the calendar of strikes it became obvious that they would put a stick in the wheels (literal translation of “mettre des bâtons dans les roues”, a great French expression I learned recently) of the little suitcases that Parisians love to trot out of the office with on Friday evenings.  And sure enough, colleagues and friends quickly started hatching alternative plans to get to and from their weekends in Deauville or weddings in the Sud.

That was not the only flow-on effect.  The strikes have made it near-impossible to schedule meetings at the office: I cannot count the amount of réunions I have had to cancel or reschedule or the number of Doodles I have had to send around in the past three months to try to work around the grèves.  It is *almost* as hard as trying to find a Saturday night to catch up with my girlfriends, when the diaries magically align and nobody has a dîner/anniv/mariage, etc. (proving yet another cliché about Parisians – that their diaries are booked up for months in advance – to be entirely true).

But all of this was fine.  I could deal.  The right to protest is sacred in France; I knew that coming in.  It may not be protected in the Constitution, but it does feature in Article 10 of the Déclaration des Droits de l’Homme et du Citoyen of 1789 (« Nul ne peut être inquiété pour ses opinions, même religieuses, pourvu que leur manifestation ne trouble pas l’ordre public établi par la loi » / “No-one should be harassed for their opinions, even religious ones, provided that the expression of such opinions does not cause a breach of the peace as established by law”), a copy of which I signed when I agreed to become a French citizen.  That the French are willing to take to the streets to protect their rights and to express their opinions freely is something that should be admired, not mocked.

So I was making do and dealing with the grèves like any good Parisian.  Until just the other day, when I ran into a former colleague after work on Rue Danielle Casanova near the Place Vendôme.  He was standing outside a bakery, briefcase in hand, looking exasperated.  Why?  “The vélib’s are on strike!”  He told me.  (Vélib’ is the public bicycle-sharing system in Paris).  “The bicycles are on strike?!”  I asked.  “How is that even possible?!”  Mais oui, you only had to look at the empty bicycle racks and error messages on the screens of the bornes to see that it was true.

I, too, could feel my exasperation levels rising.  Alors, I dug a little deeper and realized the Vélib’ workers are indeed on strike, and probably with good reason.  So I had no choice but to think to myself, “chapeau” (hats off) to the Vélib workers, while praying to the RER gods (who control the suburban train system I take to work everyday) that the cheminot mega-grève would not be renewed.

8 thoughts on “…you learn to live with the strikes”